The long years of efforts to protect the mostvaluable natural and cultural objects and localities of our planet to aworld-wide extent led, on the level of UNESCO, to adoption of the Conventionconcerning the Protection of the World Cultural and Natural Heritage in 1972.The World Heritage List is accessible only to those states that have ratifiedthe convention and the related obligations. After almost half of a century ofthe existence of this significant document 936 properties have been inscribedon the World Heritage List. World Heritage means outstanding universal valuewhich is so exceptional as to transcend national boundaries and has commonimportance for present and future generations of humanity. As such, itspermanent protection is of the highest importance of the internationalcommunity as a whole. 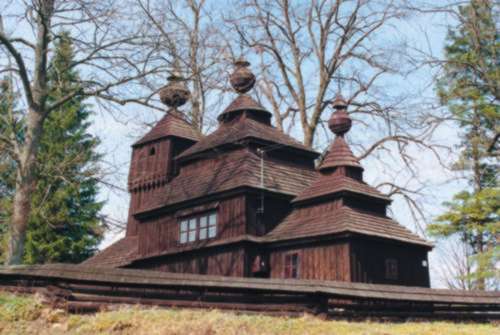 Wooden churches of the Slovak part of the Carpathian Mountain Area were included in the United Nation’s World Heritage list in 2008. Disregarding number of regional or local specialities, they represent a unique example of synthesis of two major cultures – Eastern and Western, Byzantine and Latin. This system of eight wooden temples is a unique example of the European wooden sacral architecture illustrating the period between the 16th and the 18th centuries. Wood was the basic constructional material using traditional constructional techniques. Wooden churches – according to their confessional churchmanship within common properties, have several typological variations. They are an evidence of the architecture and art development in the time of their origin and they are adjusted to the geographical and cultural context. They represent a symbiosis of Christianity and folk architecture enhanced by the professional mastership of makers, including their basic cultural and aesthetic postulates. Evangelical churches serve also as an example of a tolerance of the antireform movement during the Habsburg monarchy in the Upper Hungaria in the 17th century.
From the original number of about 300 wooden sacral constructions, following action of natural disasters, confessional, social and political changes, there have been preserved around  50 of them up to the present day.

After a thorough assessment the following 8 churches have been selected which were included in the World Heritage list: 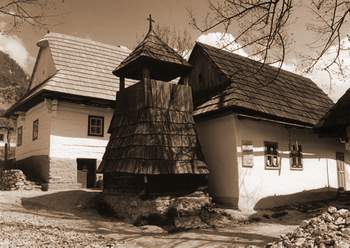 Vlkolínec settlement represents a type of middle Slovak rural settlement with wooden architecture of montane and submontane areas with unimpaired housing from log houses in the heart of landscape environment, composed of narrow strips of fields and pastures. From north side the area is protected by Sidorovo massif. In the middle of the traditional housing log wooden belfry from 1770 and well were preserved. They are located in the centre of the settlement.. Both separate objects were constructed in a traditional way and they are covered by shingles, samely as all original roofs of houses and farm buildings.
Vlkolínec was evaluated as best preserved settlement of its type within Carpathian region. Fast bloom and glory of free royal town of Banská Štiavnica were directly connected with rich deposits of metal ores and possibilities of their exploitation. Direct proof of an importance of town is not represented only by its considerable size already in Romanesque era, but also by imposing architecture. Representative centre of town, formed in the course of 16th century, is characterised by city hall and late gothic church of St. Catherine together with large houses of burgesses from gothic-renaissance era. In the same period fortification system has been built. The system also included Piargská Gate that was preserved to present times with baroque adaptation. The system was strengthened by the Old Castle, re-built from original Romanesque church, and renaissance New Castle.
An indivisible part of memorial fund of town are large complexes of technical components connected with mining and processing of poly-metal ores: pits, tunnels, mining towers, „klopačka“ building (from which signals for miners to come to work were sent), ingenious water supply system representing a part of landscape as well as buildings of the first Academy of Mining and Forestry in Europe. 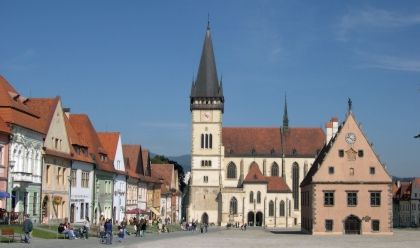 Urbanistic complex of the historical core represents unique set of highly developed medieval town. Urban ground plan with regular disposition of streets around large square is an important evidence of European civilisation in 13th-14th century. A conception of the ground plan was retained in considerable extent without dramatic extensive interventions. Regardless of interdigitation of Eastern and Western culture in the town, its urbanistic plan and retained historical architecture clearly proves its position in middle Europe.
Developed burgess culture of Bardejov was formed by multinational ethnic groups and multicultural society. Within the context retained Jewish suburbium represents an important integral part of the record. Bardejov town with its ground layout, constructions and fortification represent an example of excellently retained economic and social structure and urbanistic complex developed in the medieval Europe in important points of trade routes. Ruin of Spiš castle, emerging from lime rock, is a dominant of breathtaking urbanistic-landscape complex of middle Spiš area. The castle belongs to the biggest medieval fortification complexes of the central Europe. Already in Romanesque era the castle has its antipole – Spiš chapter house, the seat of clerical administration. The chapter house is currently characterized by imposing cathedral of St. Martin with two towers. These centers of power and administration in Spiš are interconnected by buildings of Spišské Podhradie, originally settlement before castle, later town with typical renaissance-baroque houses of burgesses. Given memorial complexes also include Žehra village with its early medieval church of St. Spirit with five periods of wall paintings. The village is detached from the castle by lime massif of Dreveník. Extraordinary position of Levoča town can be also seen from preserved building-up from 14th-15th century, disposed around rectangular square in a planned manner. In addition to imposing houses of rich burgesses it is mainly represented by a parish church of St. James, renaissance city hall, gothic churches with monasteries of minors and large system of ramparts. Cultural-historical importance of Levoča occurs in the area of fine arts. Within the context the most important presentation is represented by works of Master Paul, the woodcarver. He had created the highest preserved wing altar of late gothic era worldwide, located in the parish church of St. James.
The Castle of Spiš (Spišský hrad), the town of Spišske Podhradie and Spišská Kapitula, Žehra village and the town of Levoča are the evidence of the development of independent urban typological medieval settlements which have not been preserved as a set in such conditions and type representation anywhere else in the world. They have been strongly interconnected, have influenced each other yet have never merged into one unit.
Intact condition of the memorial sets typical for medieval period represented one of the main reasons for inscription of Levoča, Spišský Hrad and the Associated Cultural Monuments on the World Heritage List.