Červený Kameň Castle documents whole-European significance of the Thurzo-Fugger company, one of the biggest companies in Europe in the period between 1494/5 and 1526.

With its huge complex of processing plants, elaborated organization of production, dense network of stores and double-entry bookkeeping, the copper mining and processing company, headquartered in Banská Bystrica,  pertained to the biggest and the most advances European companies of era of early capitalism in the field of mining, metallurgy, transport and trade.

In its time, the Thurzo-Fugger company was one of the most important copper producers worldwide. Considering volume of its production the company had no real competitor in then Europe. It exported metals and various commodities into German, Polish, Italian and Dutch towns.

Reflexion of the company's size and importance is Červený Kameň Castle, huge stronghold with the largest storage spaces in Europe. In the first half of the 16th century, Fugger family had the original medieval castle reconstructed in accordance with the most advanced principles into new citadel with central square yard and four corner bastions. Specialised building works were performed by Giovanni de Spatio on the basis of Albrecht Dürer's design. The stronghold was not only a safe place reflecting unprecedented progress in development of arms, but, owing to its system of vast cellar storage spaces, it mainly served as storage and trans-shipment station for needs of the company.

The Bradlo mound is symbol of life and work of French general Dr. Milan Rastislav Štefánik.

M. R. Štefánik (*21.7.1880 in Košariská, ┼ 4.5.1919) was politician, astronomer, military aviator, scientist and soldier of European significance, ideological initiator and leader of the Czechoslovak Legions, who stood at nascence of modern statehood of independent Czechoslovak Republic.

He was the man, who influenced European politics with his admirable diplomacy. Based on his thoughts, opinions and acts we can consider him as the first "European". He envisaged that European nations would once co-exist in harmony, calling the idea "Europeization".    However, Štefánik was also very devoted to his nation. He expressed his love to his country by the motto, in accordance with which he tried to live:

The mound, built on the basis of design of Dušan Jurkovič, was unveiled September 23, 1928.

It joins tomb and monument.

This unique monument of European significance represents symbol of love, esteem and gratefulness of Slovaks and Czechs to the great European personality. Štefánik's legacy is a part of democratic heritage, whereby we have contributed to creation of modern Europe.

Period from the 9th century to the beginning of 11th century in Slovakia is characterized by formation of the first historically known state units – the Principality of Nitra, the Great Moravia and the Kingdom of Hungary. From the organizational point of view, spreading of Christianity in territories of afore-mentioned states was completed in the Carolingian era, when the Moravian archdiocese, headed by St. Methodius, was established in 870, and later by formation of Hungarian ecclesiastical organization.

Both churches represent a symbol of Christianity as timeless and unifying phenomena having essential impact to history and current shape of Europe. Moreover, they are proof of flourishing traditions of  cult of Saints Cyril and Methodius, whose  missionary activity based on encouraging the use of Old Slavonic in liturgical life in early medieval era influenced large area of central, southern and eastern Europe.

The church is situated in Kopčany village in the south-eastern Slovakia, at the Morava river, on today's borders with the Czech Republic. It is the only Great Moravian church with almost completely preserved mass. The church is a part of the Mikulčice – Kopčany agglomeration, which belonged to main centres of the Great Moravian Empire. It belongs to central buildings of the archeological site, where evidence of original, relatively independent settlement unit were found. From the 9th century to the 10th century, the church with cemetery was a central building of ecclesiastical district on historical road to Valy hillfort in Milulčice, which is presumed to be a seat of Moravian archbishop Methodius. 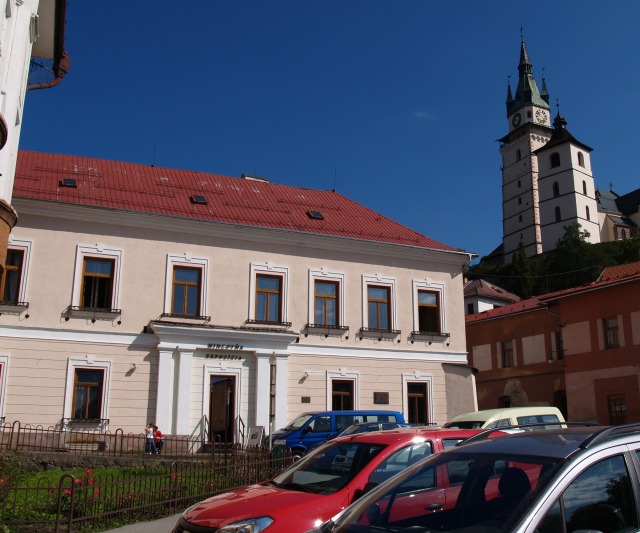 Kremnica Mint is one of the oldest production facilities with an uninterrupted operation not only in Europe, but also worldwide. Coinage products that have pertained to top worldwide products are continuously being produced in the town of Kremnica for almost seven centuries (since 1329).

It has been protected since 1955 as a national cultural monument.

As confirmed by written documents, operation and associated activities aimed at production of coins and medals has existed in this place for more than 560 years. One of the unique values of the mint is its archive containing documents about the mint’s activities since 1630, which makes it the oldest company archive of historical production facility not only in Slovakia, but probably also in Central Europe.

The Hungarian king Charles Robert of Anjou promoted Kremnica from a village that had grown around rich gold deposits to a free royal town in 1328, granting to it a right to operate a mint. The first coins minted in Kremnica mint were silver groschens, probably in 1329. In later times, Kremnica mint produced coins for various currency systems. Initially they were made of silver and gold, later also from other metals (tolars, ducats, groschens, and others).

The era of the greatest fame of Kremnica Mint was associated with the use of a screw press, referred to as 'Balancier'. This machine was introduced at Kremnica Mint by the well-known Swedish engineer, engraver and medal-maker Daniel Warou in 1710. With this machine a modern coin minting method was introduced which has been in use up until now. Thus, Kremnica became the first location in Central Europe to use the Balancier machine. Kremnica's manufacturing pattern was then followed by mints in Vienna and Prague.

In late 1986, a new plant outside the confines of the town was completed, and the entire coin production was transferred there in order to avoid disturbing the tranquil atmosphere of the historical town's centre. Only medal production remained at the old location. Until the early 1990's, the Mint plant was the only currency producer for the Czech and Slovak Republic. As of 1 January 1993, the plant continues to serve this duty on behalf of the independent Slovak Republic. In the end of 2008, Kremnica Mint struck also the new Slovak euro coins.

Currently, Kremnica Mint is a manufacturing facility, and at the same time it is a cultural and artistic institution, and a symbol of the state's sovereignty.

This site plays a key role in understanding of the European history and culture and has a transnational dimension, which aims to promote the European identity.